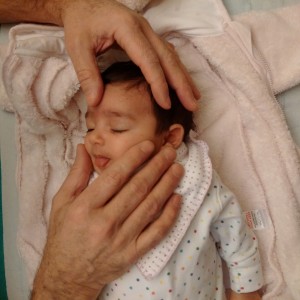 “We have now removed the services of treating Babies”

Children and Babies present to Osteopaths with a variety of ailments, far too many to list here. However it is hoped that the reader will get an understanding of how apparently small problems early in life can have far reaching consequences many years later. Unresolved birth trauma regularly creates problems which begin in a young baby, possibly persisting throughout life.

Therefore it is important that early Osteopathic treatment can be beneficial in the prevention of future problems. Checking all is well with the body and development, particularly after rapid or longer births, where the head has been down for prolonged time, after ventouse or forceps deliveries and emergency C-Sections. These situations can influence poor mechanics of the sinuses, breathing, Eustachian tubes, joints and fluid movement. This can be a major contributing factor to many of the more common problems parents come to us with.

Cranial Osteopathic treatment is gentle and effective, using the natural forces of regeneration and growth within the body to guide the body into normal healthy function. A common response of parents is “My baby changed dramatically after treatment but you only held them for a few minutes, what did you do? ” The answer is, very little, we just pointed the way for the body to correct itself.   For this reason osteopaths working with young children and babies encourage early treatment.

The human body has incredible powers of healing and regeneration. Cranial Osteopathy works at any age with the forces of growth and development to guide and influence the body back to it’s normal healthy function. These forces of growth are at their most vigorous in the early years, this means that babies and children can respond very rapidly to treatment.

For a  general check up and treatment the younger the better. We personally recommend a check up between two and four weeks with a follow up around seven to ten weeks. Normalising the structure in a newborn can have exceptional results as there are normally few fixed structural problems at this age. Treatment may be  effective up to seven years of age at which time the bony skeleton begins to mature. These times are windows of opportunity for the osteopath.

Finally, the importance of the “health of the mother” during the early development of the new baby does not receive as much attention as I believe necessary. Experience has shown me time again that a couple of treatments for the mother to correct and reduce the physical stresses of feeding and carrying has profound effects, not only on the mother but the child as well. With that in mind I recommend treatment for the mother on back shoulders and neck between five and seven weeks on her own without the presence of the baby.

When you bring a newborn you will be concerned about “what do we actually do to our baby?” We will hold various parts of the newborn whilst assessing it’s fascial and dural movement, palpating the underlying rhythms of the body’s function. We pay particular attention to the joints ankles, knees, hips, sacrum, diaphragm and it’s attachments to the twelfth rib, the thorax, cervical spine particularly the junction with the Occiput part of the  Cranium ( where Cranial nerves supplying the tongue and stomach emerge, which may lead to irritation of the stomach, sinuses and feeding difficulties ) and finally the bones that make up the skull and face, making sure that post birth all the various bones are returned to their relevant positions.

For further information on how Osteopathy can be helpful for babies and children.

We were also recently featured in the Daily Mail:
www.dailymail.co.uk/health/article-2004700/Cranial-osteopathy-Soothing-away-babys-colicy-cries.html