In the last two years we have had increasing numbers of patients presenting with neck problems as a direct result of copious hours of the neck bent forward staring at small screens whilst texting. This makes the muscles overwork to hold the head up against increasing gravitational pressure. Overdevelopment of the Cervical spine muscle causes the vertebrae to become compressed around the discs and can lead to irritation of the nerves to the arms and compression in the upper Cervical spine can lead to nausea, headaches and sinus issues.

This article from the USA  was recently published online and sums it all up very nicely. 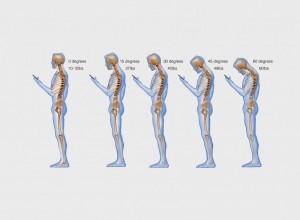 The human head weighs about a dozen pounds. But as the neck bends forward and down, the weight on the cervical spine begins to increase. At a 15-degree angle, this weight is about 27 pounds, at 30 degrees it’s 40 pounds, at 45 degrees it’s 49 pounds, and at 60 degrees it’s 60 pounds.

That’s the burden that comes with staring at a smartphone — the way millions do for hours every day, according to research published by Kenneth Hansraj in the National Library of Medicine. The study will appear next month in Surgical Technology International. Over time, researchers say, this poor posture, sometimes called “text neck,” can lead to early wear-and-tear on the spine, degeneration and even surgery.

“It is an epidemic or, at least, it’s very common,” Hansraj, chief of spine surgery at New York Spine Surgery and Rehabilitation Medicine, told The Washington Post. “Just look around you, everyone has their heads down.”

Can’t grasp the significance of 60 pounds? Imagine carrying an 8-year-old around your neck several hours per day. Smartphone users spend an average of two to four hours per day hunched over, reading e-mails, sending texts or checking social media sites. That’s 700 to 1,400 hours per year people are putting stress on their spines, according to the research. And high-schoolers might be the worst. They could conceivably spend an additional 5,000 hours in this position, Hansraj said.

“The problem is really profound in young people,” he said. “With this excessive stress in the neck, we might start seeing young people needing spine care. I would really like to see parents showing more guidance.”

Medical experts have been warning people for years. Some say for every inch the head tilts forward, the pressure on the spine doubles.

Tom DiAngelis, president of the American Physical Therapy Association‘s Private Practice Section, told CNN last year the effect is similar to bending a finger all the way back and holding it there for about an hour.

“As you stretch the tissue for a long period of time, it gets sore, it gets inflamed,” he said. It can also cause muscle strain, pinched nerves, herniated disks and, over time, it can even remove the neck’s natural curve.

Michelle Collie, a doctor who heads Performance Physical Therapy in Rhode Island, told CNN last year she started seeing patients with mobile technology-induced head, neck and back pain some six or seven years ago.
Poor posture can cause other problems as well. Experts say it can reduce lung capacity by as much as 30 percent. It has also been linked to headaches and neurological issues, depression and heart disease.

“While it is nearly impossible to avoid the technologies that cause these issues, individuals should make an effort to look at their phones with a neutral spine and to avoid spending hours each day hunched over,” according to the research.

Look down at your device with your eyes. No need to bend your neck.
Exercise: Move your head from left to right several times. Use your hands to provide resistance and push your head against them, first forward and then backward. Stand in a doorway with your arms extended and push your chest forward to strengthen “the muscles of good posture,” Hansraj said.
“I love technology. I’m not bashing technology in any way,” Hansraj told The Post. “My message is: Just be cognizant of where your head is in space. Continue to enjoy your smartphones and continue to enjoy this technology — just make sure your head is up.”