The authors share how an osteopathic approach to this secondary headache disorder may save time and cost.
By Victoria A. Troncoso, DO, James F. Keane, DO, MEd, Deborah Heath, DO and Leonard Goldstein, DDS, PhD

Cervicogenic headache constitutes 15 to 20% of all chronic and/or recurrent headaches and is categorized as a secondary headache, meaning the condition results from an underlying disease. CGH specifically stems from a neuromusculoskeletal dysfunction of the cervical spine, particularly the upper three cervical segments.1,2,3

The World Cervicogenic Headache Society has defined CGH as head pain that is referred from a primary nociceptive source in the musculoskeletal tissues innervated by the cervical nerves.4 It is characterized by a unilateral headache with signs and symptoms of neck involvement, such as pain on movement, by external pressure over the cervical spinal segments, and/or sustained awkward head postures.5,6,7 The differential diagnosis for CGH is wide and includes, in part: migraine, occipital neuralgia, arteriovenous malformation, Chiari malformation, meningitis, glaucoma, pseudotumor cerebri, vasculitis (especially temporal arteritis), cervical spondylosis, tumor, and autoimmune conditions including rheumatoid arthritis and vertebral artery dissection.8

Broadly speaking, the literature has a wide range as to the definition and diagnostic criteria of this disorder. For instance, several sources exclude arthritic conditions, spondylolisthesis, or other disorders associated with aging of the upper cervical spine that are not attributable to the development of CGH. As a result, CGH may be characterized by headache resulting from non-arthritic conditions of the cervical spine and has been shown to occur during the manipulation or stimulation of the upper cervical spinal segments.

One source suggests that CGH usually presents clinically as a hemicranial pain syndrome caused by upper cervical spine disorders of the three spinal nerves. In addition, dysfunctions of structures that are innervated by these nerves may be possible sources of the headache.9 Pain often involves the posterior occipital area of the skull and extends to the ipsilateral orbit. The upper three cervical nerve roots associated include: the infra-tentorial dural membranes and branches of the trigeminal (V1) supra-tentorial membranes.10 In evaluating post-neurosurgical pain, Kemp, et al, discussed the innervation of the dura in the posterior cranial fossa.11 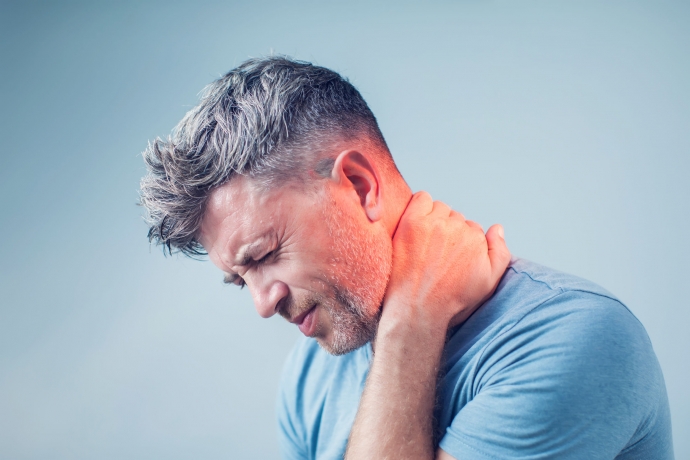 Recognizing additional treatment options for patients with cervicogenic headache and their long-term benefit, which may reduce the cost of diagnostic testing and long-term care. (Source: 123RF)

Several schemes have established the general diagnostic criteria of CGH as the reproduction of the headache following stimulation of the upper cervical nerve roots. In addition, anesthetic blockade is widely regarded as a confirmatory test, although often considered unnecessary in clinical diagnosis.5,6,7 This approach connects this syndrome to dysfunctional upper cervical neural structures. As a result, the underlying cause of cervical neurologic dysfunction must be established. Film radiographs, magnetic resonance imaging (MRI), and computed tomography (CT) myelography appear to have limited use in diagnosing CGH.7 MRI evaluation of the cervical spine “reported no demonstrable differences” between CGH patients and a control group in the appearance of cervical spine structures on MRI scans.7 Diagnosis is made by clinical presentation and diagnostic criteria, and may only be definitely confirmed by stimulation of upper cervical nerve roots.12

The physiologic basis of upper cervical dysfunction leading to CGH is known to lie in the convergence of the afferent branches of trigeminal nerve (fifth cranial nerve) with the upper three cervical sensory nerves, called the trigeminocervical complex (TGC).13 These converging signals excite the spinal cord interneurons, which relay outputs to local structures and ascend to the thalamus and sensory cortex. Depending on the duration and severity of the original sensory input, the TGC may be susceptible to hyperexcitability, which may lead to hypertonic muscles and pain in structures that share this innervation. Further, TGC may also affect the parasympathetic (vagus) and sympathetic systems impacting diverse functions in the chest, head, and face.8 When pain and hypertonicity resustain, neuroplastic changes may occur at the spinal cord level where minimal provocation elicits an exaggerated response, or central sensitization.14

Additional treatment modalities may include:

Within the literature, manual medicine—which seeks to restore upper cervical mobility through a wide range of therapeutic procedures, including mobilization and manipulative techniques—has been found beneficial in CGH as well. Several studies have identified benefit regardless of gender, age, or headache chronicity.16,17 Manual restoration of upper cervical and thoracic spinal mobility to reduce peripheral input is one of the main objectives for the successful treatment of CGH.18 A review of random controlled trials involving manual therapy, including OMT, showed statistically significant improvement in patients’ symptoms, especially when combined with exercise.19

Consistent with current understanding of CGH, “osteopathic physicians theorize that cervical mobilization and manipulation procedures decrease the afferent stimulus into the spinal cord from cervical joint receptors by relaxing the paraspinal muscles and releasing strain on the connective tissues and joints, thus relieving the pain of CGH.”8 An osteopathic approach to CGH may be beneficial therapeutically, but also diagnostically. As noted, imaging studies and other diagnostic modalities are often of limited value beyond evaluating the differential diagnosis of CGH. In addition, the reproduction of CGH symptoms with nerve stimulation has demonstrated consistency in diagnosis across medical and therapeutic paradigms.

A central component in the osteopathic approach to patient evaluation and treatment always includes a thorough history and physical exam supported by an in-depth understanding of the underlying anatomy and physiology. If abnormal findings are identified through traditional clinical skills or palpation, appropriate testing and treatment is implemented immediately. In the absence of “alarm symptoms,” addressing the condition from an osteopathic perspective involves looking at the whole body, with specific attention to each of the areas involved in the pathogenesis of CGH, including the upper cervical spine; the cervical musculature and ligaments; and the cranial and jaw structures.

In most cases, reduced range of motion (ROM) and pain represent the function of the “sensitized” cervical output with hypertonicity and pain in CGH. An osteopathic physician may utilize specific diagnostic procedures and criteria to identify the presence of somatic dysfunctions in the region of interest. The presence of somatic dysfunction may indicate disturbances in associated nerve roots; in the muscular, fascial, and ligamentous structures; as well as in the local autonomic and lymphatic functions.8 With CGH, cervical somatic dysfunction typically affects not only the perception of pain, but also the physiologic and nociceptive function of any shared innervated organ and skeletal structures.8 Essentially, the identification of somatic dysfunction is a physical manifestation that a segment is sensitized. While any area of the body may result in cervical spine dysfunction, one of the most important causes of CGH may be myofascial trigger point activity, specifically from the sternocleidomastoid muscles.20,21

Once identified, appropriate OMT may be used to treat the somatic dysfunction, which may, in turn, resolve CGH symptoms. Specifically, OMT may help to restore homeostasis as evidenced by improved ROM, reduce pain in the spinal and cranial nerve structures, and reduce swelling and inflammation. OMT methods may address soft tissue, counterstrain, fascial release, muscle energy, and high velocity/low amplitude. The type of OMT applied in CGH treatment depends on the tolerance of the patient and the specific diagnostic findings.

Chronic headaches affect a sizeable portion of the population and present a significant cost to the healthcare system. Evaluations suggest that many clinicians order unnecessary testing, such as imaging; delay treatment of pain by referring to sub-specialists; or utilize non-specific pharmacotherapy in managing pain.22

Secondary cervicogenic headache, in particular, is amenable to diagnosis and treatment without imaging, sub-specialist referral, or the use of medications that tend to reduce symptoms rather than treat the disorder. An osteopathic approach, including osteopathic manipulative treatment, may be well suited for both the evaluation and treatment of CGH. When OMT is utilized appropriately, patients with CGH may find relief and resolution of their symptoms while minimizing additional imaging and medication costs.

For an initial appointment to assess Cervicogenic headaches call

This article was published as an online exclusive in association with the June 2019 issue of PPM.